Extensive step and constant rate test pumping was carried out, both on each individual borehole and a combined test with four of the five boreholes.  The step testing consisted of 5no. 24 hour steps of rates in excess of 130m3/hour (35l/s), followed by a 10day constant rate test at rates in excess of 130m3/hour (35l/s).    The combined test was carried out on four boreholes pumping together at rates of 100m3/hour (27.5l/s) per borehole, covering a 14 day period, plus 5 day recovery test.

The strata encountered during drilling was extremely difficult, complicated and interchangable being made up of a mixture of sand and gravels at depth, sandstone, iron stone, and heavily fractured sandstones.  The aim was to complete the boreholes into the faults so to maximize the yields.

A decision was taken to  use cable tool machines to not only accommodate the difficult strata, but also to overcome the very tight site constraints imposed on ourselves, with no water for the drilling process and all sites being adjacent to highways and domestic housing, it was of paramount importance that we kept the disruption to the general public to a minimum. 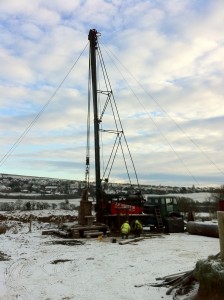 All the boreholes were geologged, with extensive logging carried out.

The boreholes were 100% vertical, constructed better than the industry standard for verticality  of 1 in 100.

All the boreholes proved to be a massive success with the yield far better than expected.

All the boreholes yielded over 3ml/day with an average drawdown of 20 metres.